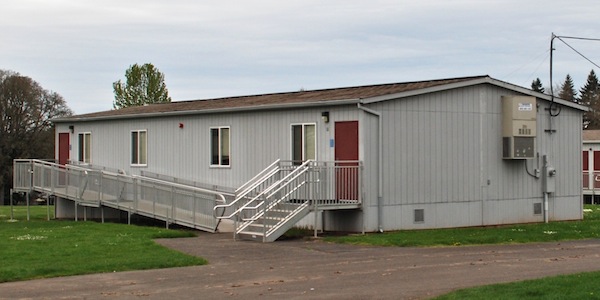 Are you at peace with the idea that young children should need outerwear in the classroom during winter or perhaps require an umbrella when it rains, simply to visit the restroom? You may stop reading, now.

Are you not annoyed that terrains previously utilized by children during recess have evolved into trailer parks sometimes surrounded by 8-foot-high chain-link fence? This commentary is not for you.

You will sometimes hear them referred to as “modular classrooms.” Euphemistically, educators call them “temporaries” or “temps.” This, however, is an egregious misnomer. Seldom are they “temporary.”  Temporaries have, instead, become semi-permanent monuments to our societal indifference to the educational environment endured by children. Do you believe these structures to be adequate substitutes for permanent structures? Suppose the choice to be between a temporary and a permanent structure during a tornado… Where would you prefer a teacher take shelter with your children?

We must forget, for a moment, that the climate in our permanent structures is sometimes so unbearable — leaking ceilings, mildew, sweltering in the summer, frigid in the winter — that, occasionally, teachers come to prefer life in the trailer park hidden behind the schoolhouse. That will be another commentary.

More than a decade has passed since The Bridge to Excellence Act, inspired by the recommendations of the Thornton Commission, adopted the precepts of “adequacy and equity” for Maryland’s public schools. We have made some progress in the intervening years. The $2.7 billion backlog of projects on the Capital Improvement Plan (CIP) is, however, routinely underfunded at the local & state levels. It would require decades of funding at the current level merely to complete the backlog without even considering future attrition to physical plants that have exceeded their anticipated useful life span.

That the conditions described in the first two sentences occur most frequently in schools populated by children confronting socio-economic challenges suggests that we still have far to go in achieving education equity in every zip code.

Will our community rise to the challenge of funding appropriate additions to the educational infrastructure? Or, will future union presidents hear a principal say, as I once did during a school visit, “Now, let’s visit the other school outside”?

[The original version of this Commentary appeared in the now defunct Prince George’s Gazette on September 12, 2013. It has been slightly revised for the purpose of rendering more current.]