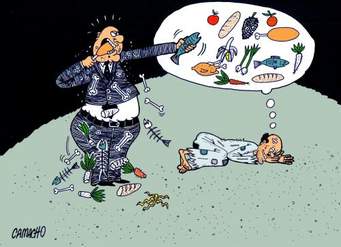 The right to acquire wealth is not absolute. Your right to riches does not extend to harming your neighbors.

Too many of those preoccupied by the acquisition of wealth are more than willing to poison the water table, destabilize the climate, or even instigate wars to sell weaponry. Our history is replete with examples of enterprises whose products generated immense profits but ultimately proved harmful to the citizenry. Also, tales of ruthless and unscrupulous oligarchs adorn every decade. Overall, the obsessive pursuit of immense wealth has proven itself to be damaging to our social fabric.

Together, we must exhibit the wisdom to thwart the despoiling of the environment by industrialists. Collectively, we must have the decency to bequeath a habitable planet to our progeny. In the speech cited above, the Republican nominee proposed eliminating the energy tax and, and, later, the total elimination of governmental regulation of business.  Such acts will herald a century of environmental catastrophes and societal upheaval.

Infinite riches will mean nothing to future generations if the soil will no longer support crops, the water table is poisoned, and the food chain is broken asunder.

Good for the corporate bottom line is not always good for people.

Unbridled capitalism leads to the concentration of wealth and power in the hands of too few citizens and threatens the abrogation of our social contract. One need look no further than the recent obscene price gouging on life-saving medications to see that always “charging what the market will bear” further marginalizes the disadvantaged among us.

In his essay “The Problem is Civil Obedience,” Howard Zinn wrote, “The wealth is distributed in this country and the world in such a way as not simply to require a small reform, but to require a drastic reallocation of wealth.” America is already an unimaginably wealthy nation, but its greatness is stymied when the hoarders of capital are permitted to invest heavily in the subversion of a government of, by and for the people.

Greatness will be at hand only if we avoid a descent into some Dickensian nightmare where the masses represent grist in the mills of corporate interest. Greatness will be at hand when more equitable shares of that national wealth are distributed among those who toil a lifetime in service to the common good, expecting little more than the potential of a better life for their children.

This Commentary first appeared in the Prince George’s Sentinel on June 08, 2016. It has been slightly expanded and revised.